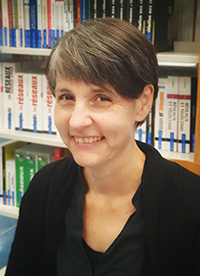 After completing two master’s degrees in Political Science (from the Institut d’Etudes Politiques) and Public Law in Strasbourg, she joined the French Library school of Lyon, ENSSIB (Ecole Nationale des Sciences de l’Information et des Bibliothèques). As a « conservateur » she was appointed as Deputy Director at the Public Library of Mulhouse in Alsace. In the course of her ten years in Mulhouse, she undertook two major projects at the library: managing the five libraries with youth sections; and then she was in charge of selecting and implementing the new ILS in the main library and its six branch libraries. In 2001, Sarah moved to the Academic library world and joined ABES (National Bibliographic Agency in Montpellier) - the home of the French Academic Union catalog (Sudoc) where she managed the training team of CBS users. In 2004, Sarah was appointed Library Director of Nice Sophia Antipolis University, now Côte d’Azur University. She undertook the development of E-resources for eight multidisciplinary libraries and created the Information System Department in 2007. She is director of the library since 2012.