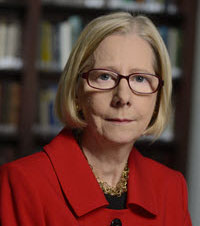 Kathleen Keane brings a range of publishing experiences to the OCLC Board. She now serves as an advisor and consultant in academic publishing. In 2017, she retired as Director of the Johns Hopkins University Press, a multifaceted organization widely recognized for driving innovation in scholarly publishing. One of the largest university presses in the United States, the JHU Press combines traditional books and journals publishing units with cutting-edge service divisions that sustain diversity and independence among nonprofit, scholarly publishers, societies, and associations.

After joining the JHU Press in 2002, Kathleen led the Press through a period of significant growth. Project MUSE, created in collaboration with the MSE Library at Johns Hopkins in 1995, grew to provide libraries worldwide with digital access to more than 300,000 articles and 600,000 chapters from over 200 humanities and social sciences publishers. The Press also became the largest journals publisher in the US university press community, with 80 journals in the arts and humanities, technology and medicine, higher education, history, political science, and library science. Recognized for award-winning books in literature, history, higher education, science, health, and ancient studies, the Press published and maintained an active list of over 3,000 titles.

Prior to joining Johns Hopkins, Kathleen held leadership roles in commercial medical publishing. She served as Executive Vice President at Harcourt Health Sciences and at its predecessor, W. B. Saunders Company, and was Vice President, Finance at J.B. Lippincott Co.

In addition to her service on the OCLC Board, Kathleen was a Director of CrossRef, the Publishers International Linking Association (2014-2016). She was also President (2009-2010) and Board Member (2007-2011) of the Association of American University Presses.

Kathleen holds a bachelor's degree from Connecticut College, a master's in English from The Catholic University of America, and an MBA from the Darden School at the University of Virginia.

She was appointed to the OCLC Board of Trustees by the Board in November 2014.