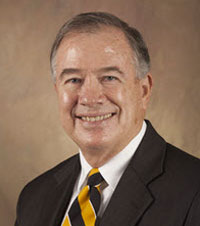 Brady J. Deaton was Chancellor of the University of Missouri from 2004–2013 and now serves in emeritus status and as Director of the Deaton Institute for University Leadership in International Development at Missouri. He was appointed Chair of the Board for International Food and Agricultural Development by President Obama in 2011, and reappointed in 2012 for a four year term.

Brady earned a bachelor's degree in agricultural economics and a master of arts degree in diplomacy and international commerce at the University of Kentucky. He received a master of science and doctorate degrees in agricultural economics from the University of Wisconsin in 1972. He also served as a Peace Corps volunteer in Thailand, from 1962–1964, where he taught vocational agriculture in the Thai language.

He has worked in many countries to strengthen their capacity for agricultural and economic development, and has received three honorary degrees from universities in Thailand and Korea. He was elected to the Missouri Cooperatives Hall of Fame and received the Missourian Award in 2014. He is a recipient of the Malone Award from the Association of Public and Land-grant Universities for furthering international education in public higher education, was a member of the board of the Donald Danforth Plant Science Center throughout his time as Chancellor, and served on the International Committee of the Association of American Universities (AAU). In April, 2014, Brady served as a "Distinguished Guest in Residence" at New York University.

He was appointed to the OCLC Board of Trustees by the Board in November 2014.