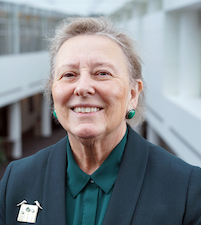 Sarah E. Thomas is Vice President for the Harvard Library and University Librarian; Roy E. Larsen Librarian for the Faculty of Arts and Sciences.

Sarah joined Harvard as Vice President for the Harvard Library in August 2013. In this role, she has overall responsibility for the Harvard Library in close collaboration with the Library Board, the Faculty Advisory Council and the Library Leadership Team. Thomas also serves as the University Librarian and the Roy E. Larsen Librarian for the Faculty of Arts and Sciences.

She previously served as Bodley's Librarian and Director of the Bodleian Libraries—the first woman and non-British citizen to hold the position—as well as Pro-Vice-Chancellor and member of the faculty of modern languages at the University of Oxford.

Previous to Oxford, Sarah was the Carl A. Kroch University Librarian at Cornell. She served as the president of the Association of Research Libraries, and also held posts at the Library of Congress, where she led in the establishment of the Program for Cooperative Cataloging; the National Agricultural Library; the Research Libraries Group at Stanford University; and Harvard's Widener Library, among other positions.