Director of DANS, DANS is an institute of KNAW (Royal Netherlands Academy of Arts and Sciences) and NWO (Dutch Research Council) 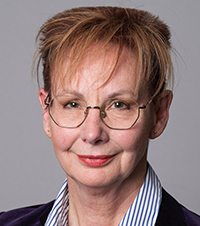 After an international career of over 30 years in library management and library automation, Anja Smit joined the DANS Dutch national centre of expertise and repository for research data in July 2022. Previously, she has served as University Librarian at the Radboud University, Maastricht University, and most recently at Utrecht University. Anja also worked with Academic Libraries in New England, in the United States, as an Executive Consultant at NELINET (now Lyrasis).

On behalf of DANS, Anja is active in the National Open Science Program and in several national and international research data infrastructures, and works closely together with academic libraries on this topic. Anja is active in national and international library networks, including the LIBER Board. In addition, she is a member of the Board of Bibliotheekservice Passend Lezen (National Library for the Blind), and Board member of the Utrecht Archive on behalf of the National Government.

Anja holds an MA from Utrecht University in Dutch Literature.