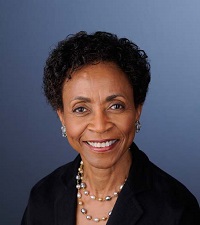 Bernadette Gray-Little is Chancellor Emerita, the University of Kansas, where she served from 2009–2017. Under her leadership, the university's efforts have included a new undergraduate curriculum that incorporates experiential learning, funding for multidisciplinary research on global challenges, streamlined administrative functions, and a successful fundraising campaign.

Prior to becoming KU's 17th chancellor, Bernadette held leadership positions at the University of North Carolina–Chapel Hill, including Executive Vice Chancellor and Provost, Dean of Arts and Sciences, and Executive Associate Provost. She was a faculty member in the Department of Psychology.

Bernadette earned her B.A. from Marywood College and an M.S. and Ph.D. from Saint Louis University. She was a Fulbright Fellow and a Social Science Research Council Fellow, and received a Ford Foundation Senior Scholar Fellowship through the National Research Council.