Lynn Silipigni Connaway's responsibilities include research projects that directly involve OCLC libraries and users, such as developing the digital "visitors" and "residents" framework and an IMLS-funded grant project to study the behavior patterns of college and university information seekers. Her previous work includes WorldCat data mining projects, JISC-funded investigations of digital information seekers, and IMLS-funded grant projects to study virtual reference services. She also was the project lead on the American Library Association (ALA) Association for College and Research Libraries (ACRL) "Action-Oriented Research Agenda on Library Contributions to Student Learning and Success." Lynn and her collaborators have won numerous awards for their research projects and methodologies.

Prior to joining OCLC Research, Lynn was the vice president of Research and Library Systems at NetLibrary. She also was director of the Library and Information Services Department at the University of Denver, where she taught several courses in library and information science. During her tenure there, Lynn conducted research on the subjects of organization and access of electronic documents, as well as the education of information professionals. She also has served on the faculty of the University of Missouri, Columbia and as a lecturer at the University of Wisconsin, Madison.

Connaway has been actively involved in numerous committees within the American Library Association (ALA), including Vice-chair (2011-12) / Chair (2012-13) of its Library Research Round Table, and Vice-chair (2009-11) / Chair (2011-12) of the Association for College and Research Libraries (ACRL) Research Planning and Review Committee and Vice-Chair (2013-2014) / Chair (2014-2015) of the Value of Academic Libraries Committee. She has served on the ALA Committee on Accreditation and is a member of the Association of Library and Information Science Educators (ALISE). She also is a member of the Association for Information Science and Technology (ASIS&T) and served as a Director-at-Large on the Board (2012-2015) and as President-Elect, President, and Past President (2016-2018).

Lynn has presented at numerous international and national professional and scholarly conferences and has many publications. She is the co-author of the 6th edition of Research Methods in Library and Information Science, 2017. 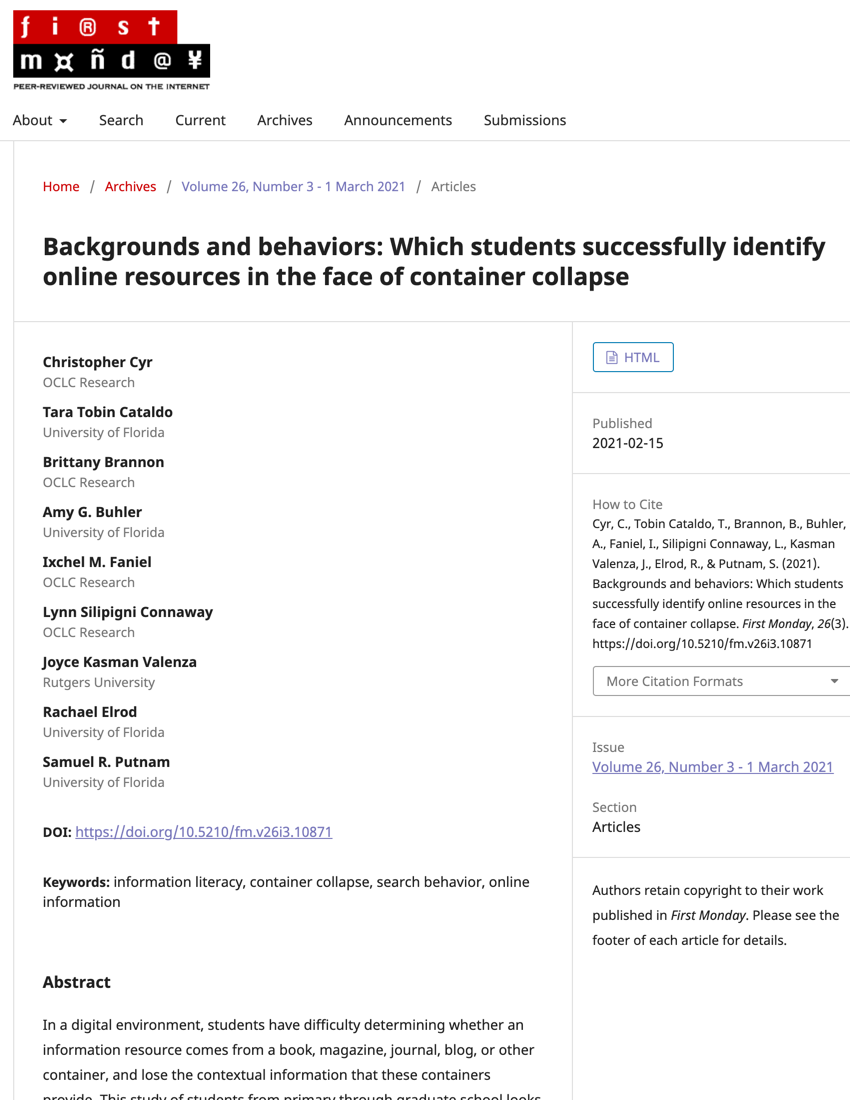 Backgrounds and behaviors: Which students successfully identify online resources in the face of container collapse

This study of students from primary through graduate school looks at their ability to identify the containers of information resources, and how this ability is affected by their demographic traits, the resource features they attended to, and their behaviors during a task-based simulation. 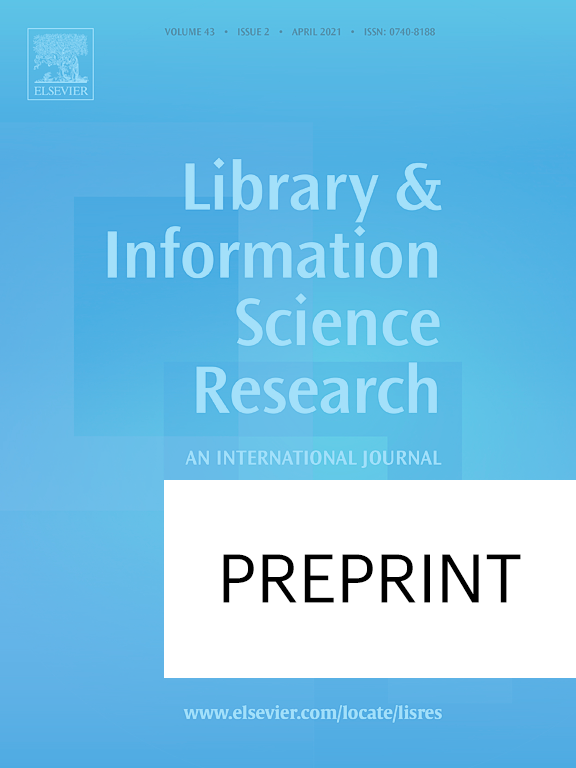 I still go ask someone I enjoy talking to: The use of digital and human sources by educational stage and context

How does educational stage affect the way people find information? In previous research using the Digital Visitors & Residents (V&R) framework for semi-structured interviews, context was a factor in how individuals behaved. This study of 145 online, open-ended surveys examines the impact that one's V&R educational stage has on the likelihood of attending to digital and human sources across four contexts. 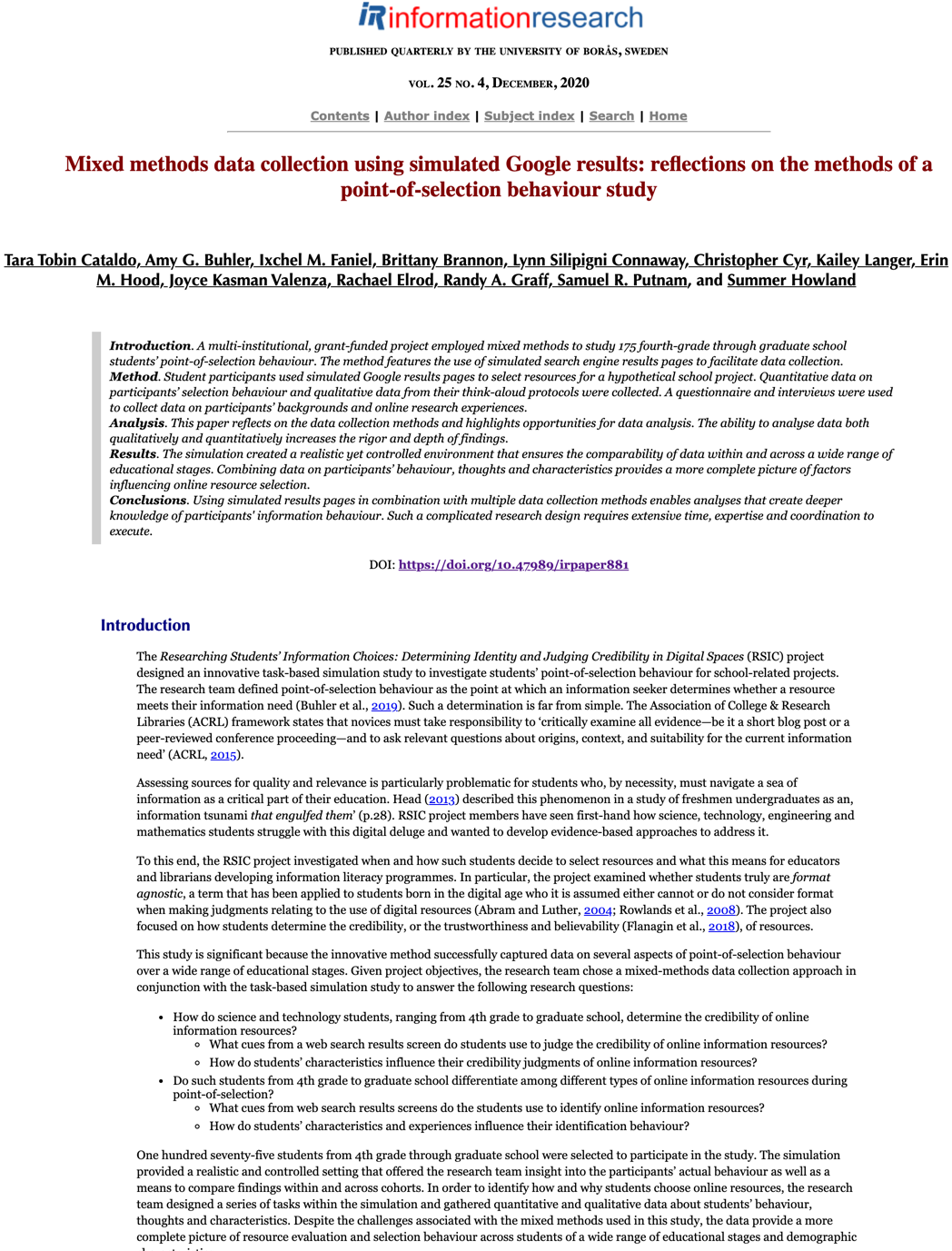 View all of Lynn's publications >>

View all of Lynn's presentations >>