Linked Data is about communities agreeing on the meaning of their data and sharing it in a massively networked information space. This vision is taking shape in many sectors, including e-commerce, medicine, scientific research, and government services. OCLC Research is a leader in driving this transformation in the library community.

The impetus for an “International Linked Data Survey for Implementers” were discussions among OCLC Research Library Partner metadata managers who were aware of many linked data projects or services but felt there must be more “out there.” In consultation with a number of colleagues, and after beta testing with a group of linked data implementers with the survey instrument, we conducted an initial survey in 2014. To address gaps in the respondents, we repeated the survey in 2015. Curious about what might have changed after three years had passed, we repeated the survey in 2018.

All responses to the three surveys (without contact information) are shared for the benefit of others wanting to undertake similar efforts in this Excel workbook.

We were curious about what might have changed since the last survey conducted in 2015 (see below). Between 17 April and 25 May 2018 we launched the "2018 International Linked Data Survey for Implementers" with the desire to learn details about new linked data projects or services implemented in the interim.

Highlights were reported by Karen Smith-Yoshimura in the following Hanging Together blog posts:

While the 2014 survey results received a generally appreciative response from readers, some noted and regretted the absence of several prominent linked data efforts in Europe. To address these gaps, we repeated the survey between 1 June and 31 July 2015, encouraging the linked data implementers who had not responded to the previous survey to respond to the 2015 survey. We also sent the survey to the 2014 survey respondents, as we were curious if anything had changed during the year.

Seventy-one institutions responded to the 2015 survey, compared to 48 in 2014. More national libraries also responded, 14 in 2015 compared to just 4 in 2014. The respondents reported they were implementing or had implemented a total of 168 lined data projects or services, of which 112 were described. 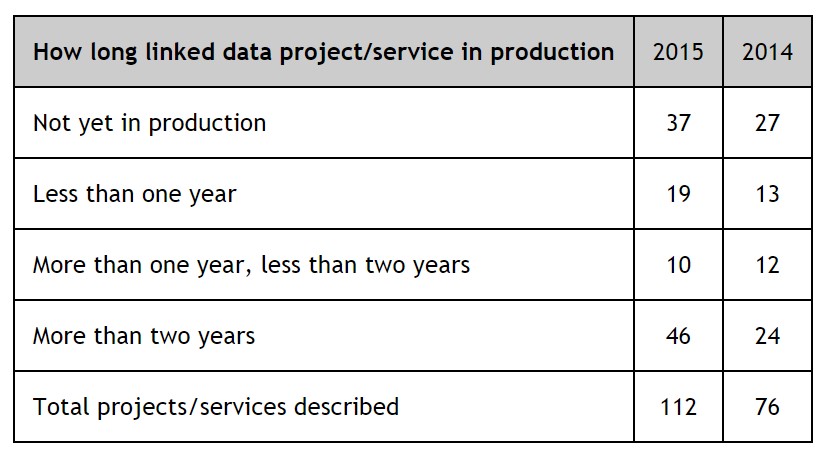 Analysis of International Linked Data Survey for Implementers
Paper  |  July/August 2016
By Karen Smith-Yoshimura
This article provides an overview of the linked data projects or services institutions or organizations have implemented or are implementing, what data they publish and consume, the reasons respondents give for implementing linked data and the barriers encountered. Relatively small projects are emerging and provide a window into future opportunities.
Published in DLIB Magazine. July/August 2016. doi:10.1045/july2016-smith-yoshimura.

Linked Data Implementations—Who, What and Why?
Presentation  |  4 April 2016
The presentation reviews the results of the 2015 survey and provides examples in production, and advice from implementers.
Presented at the CNI (Coalition for Networked Information) Spring Membership meeting, 4 April 2016. San Antonio, Texas (USA).

Prompted by the OCLC Research Library Partners Metadata Managers Focus Group, excited by the potential of linked data applications to make new, valuable uses of existing metadata, OCLC Research conducted an "International Linked Data Survey for Implementers" between 7 July and 15 August 2014. We were eager to learn details of specific projects or services that format metadata as linked data and/or make subsequent use of it.

We received 122 responses, 96 of which reported 172 linked data projects or services, and 76 of them were subscribed. Details of the responses were reported by Karen Smith-Yoshimura in the following Hanging Together blog posts:

New to linked data? No problem. We've pulled together some resources to help you get started with linked data. Check them out: 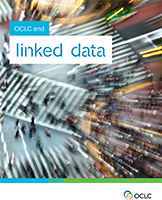