Kiwis in the Collection: The New Zealand Presence in the Published Record

An OCLC Research Report by:

Characterizing a national presence as the materials published in a country, by a country’s native-born citizens, or about the country, parallels the approach taken by many national libraries in scoping their collecting responsibilities for the national cultural heritage, and as such, is a useful way of providing a general overview of a nation’s creative tradition.

In addition to those with a general interest in New Zealand and its creative tradition, this report may also be of interest to those responsible for the stewardship of a nation’s cultural heritage, as it is expressed in the published record.

This work is an output of our activity, Scope and Diffusion of National Presence in the Published Record. 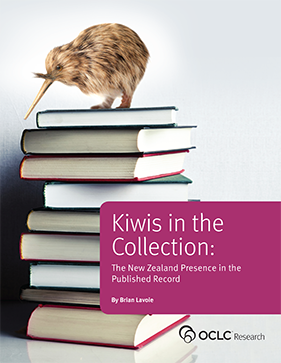 Scope and Diffusion of National Presence in the Published Record

Using WorldCat and other sources, OCLC Researchers have explored the contribution of several countries to the published record as manifested in the collections of libraries around the world.