Local Action and National Impact: A Summary of Project Outcomes and Learning from Geek the Library

The Geek the Library program created and shared resources that guided nearly 1,800 U.S. public libraries through implementation of a local campaign that forged meaningful, personal connections between community members and the library, and provided a foundation for productive local conversations around public library funding and sustainability. This brief report summarizes the purpose and key activities of the Geek the library project, its reach and participation rates, and its outcomes, including analysis from the project evaluators.

Geek the Library was devised and managed by OCLC from 2009-2015, with funding from the Bill and Melinda Gates Foundation. The evergreen resources created from this project are now under the stewardship of WebJunction, a program of OCLC Research dedicated to designing and delivering transformational learning opportunities to library staff at scale. 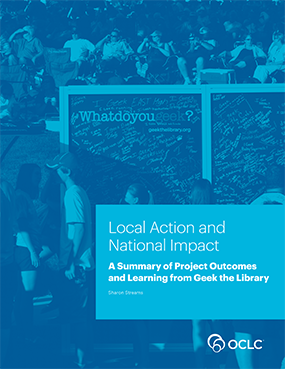