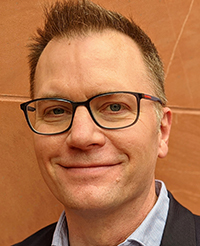 Joseph is the Associate Dean, Collection Services, at McGill University, and has been at McGill since 2004. During his career, he has held leadership positions at both McGill University and at the Indianapolis-Marion County Public Library. He is on the HathiTrust Program Steering Committee and the HathiTrust Community Metadata Strategy Task Force, and active in IFLA, serving now as the Chair of the Linked Data Technical Subcommittee (LIDATEC) and helped launch the IFLA Namespaces website. Previously he was Chair of the IFLA Acquisition and Collection Development Committee, and a founding member of the IFLA LGBTQ Special Interest Group. He was co-chair of the Canadian Linked Data Initiative, which brought together colleagues from CARL libraries to coordinate efforts in Canada on linked data, and as part of this effort, collaborated on a grant funded seminar in Montreal on linked data. Co-editor of "Space and collections earning their keep: transformation, technologies and retooling."