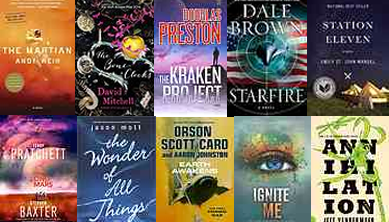 The 2015 finalists for the Hugo Awards—science fiction’s most prestigious award—were released recently, which got some of us wondering what the top science fiction books of 2014 were for libraries. So here they are, the novels in the science fiction genre published in 2014 with the largest holdings by libraries.

If science fiction isn't your thing, you can use WorldCat Fiction Finder to find all kinds of other books and movies, including lists like Top Romance Novels of 2014,  Top Mystery Fiction from the 1860s, or even top Top Adventure Stories from 2014 set in Brazil.

This list was generated using WorldCat Fiction Finder, a fiction subset of WorldCat the world's largest and most comprehensive catalog of library resources from around the world, with more than 314 million bibliographic records that represent more than 2 billion items held by participating libraries, including books, movies, music, e-books, licensed databases, online periodicals, digital collections and more. Because of its scale, WorldCat can be used to represent a large part of the scholarly and cultural record.

At OCLC Research, we're exploring records and mining WorldCat data to highlight interesting and different views of the world's library collections each month. Be sure to check out our "What in the WorldCat?" page often to see what we come up with next.