Which Monster Rules the Library?

Vee Have a Vinner: VAMPIRES!!!

Read on for the gory details. 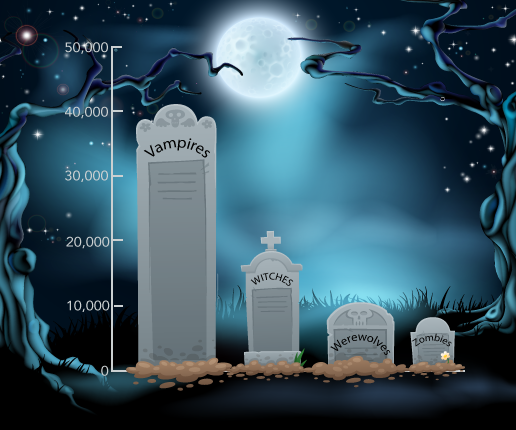 Over the past month, we've showcased lists of zombies, vampires, werewolves and witches in celebration of Halloween in our feature, 5 Lists for Halloween: Monsters Battle to Rule Libraries. This final list presents the big reveal--the monster who rules the library! By a vide--we mean, wide--margin, vampires clearly conquer all other monsters when it comes to the number of library books they haunt. From Dracula and Lestat to Edward and Vlad, congratulations!

We'd also like to extend a gracious thanks to our other monster contestants and remind them that they're only one major franchise away from taking next year's library crown from their fanged fiends.

You now know vampires rule the library, but you might not know that they sometimes hang out with werewolves, witches and/or zombies, too. To illustrate this, we've included some examples of their associations with these other monsters below.


Which Monster Duos Rule the Library?
Vampires and Werewolves!

We know that vampires, witches, werewolves and zombies rarely wreck havoc alone. They often have partners--or nemises--in crimes. As you can see, vampires and werewolves have been thrown together far more often than witches and zombies. Mental note: when visiting the library this Halloween, eat a good amount of garlic bread and wear some silver--just in case. 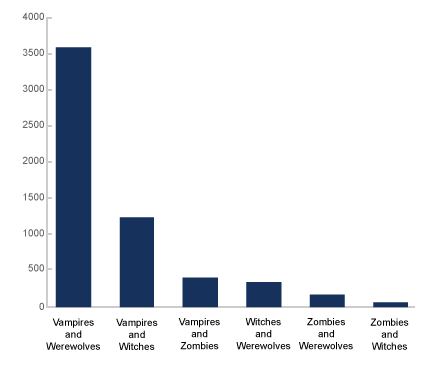 Which Monster Trios Rule the Library?
Vampires, Werewolves and Witches!

If these baddies (sometimes goodies) like to travel in pairs, then why not in trios? Let's just say we wouldn't be suprised if one dark and stormy night you ran into a vampire, a werewolf and a witch at the library, as they clearly like to group up. 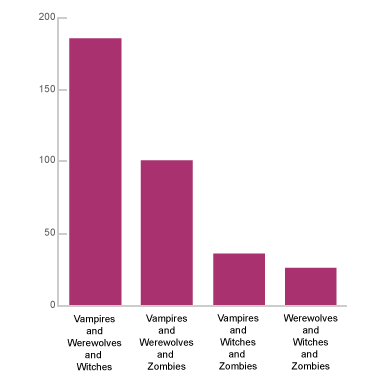 
Which Monster Quads Rules the Library?

Finally, we wondered if there were any books or other materials about all four of these monsters out there. We found only three that have all four subject headings, and of those three, only one is a fiction book. Just one! It is: 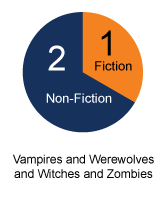 Down These Strange Streets

A collection of 17 short urban fantasy stories by various authors featuring vampires, werewolves, witches, zombies, and other creatures of the night.


This list was generated using OCLC FirstSearch against WorldCat on 28 October 2014. The data was collected by counting the number of OCLC WorldCat Records that contained the given subject heading.


WorldCat is the world's largest and most comprehensive catalog of library resources from around the world, with more than 314 million bibliographic records that represent more than 2 billion items held by participating libraries, including books, movies, music, e-books, licensed databases, online periodicals, digital collections and more. Because of its scale, WorldCat can be used to represent a large part of the scholarly and cultural record.