A genealogy researcher—now living in Columbus, Ohio—had grown up in upstate New York, her home containing a large framed photograph with eight men from the late 1800s. The family legend was that these seven brothers and their father had gone to talk to President Lincoln, and that their name was Campbell or DeCamp and they lived in Ohio.

She entered the search phrase (campbell or decamp) and family and ohio in WorldCat and found a citation for a Record of the descendants of Ezekiel and Mary Baker DeCamp of Butler County, Ohio. Since the Baker name appeared, and since WorldCat indicated that a copy of this item was in the Cincinnati Historical Society Library, she drove the two hours from Columbus to Cincinnati to look at the book.

She found that not only was Mary Baker DeCamp the sister of her great-great-great-grandmother, Phoebe Hedges Baker Marsh, but also discovered a reproduction of the same photograph from her childhood home. The book detailed the story of how these eight DeCamp brothers visited and talked with President Lincoln, after being introduced to him by a local judge:

“The President cordially shook hands with each one, saying a kindly word to each, and when he came to Job, the youngest, the President remarked that he envied him his name, as he needed patience. Job wittily replied "But you have a better name already—Abraham, the father of the faithful.”

Knowing that two of her mother's linked family names are Marsh and Baker, the same researcher used marsh and baker and family as keywords in the WorldCat database within FirstSearch. One of the results was Genealogy: The Pierson family, the Marsh family, the Clark family, the Baker family, an apparently self-published history by one Arthur N. Pierson.

Looking at the detailed record for this item, she saw that the city of Westfield in New Jersey was cited as the location of these families. Her mother's family had come from this area, so it seemed likely that this had information about her ancestors. Based on the holdings information in WorldCat, she was able to tell that the history wasn't held in a nearby library, but that it had been cataloged as a reproduction from University Microfilms International (now UMI®). She ordered a copy, and it included a hand-drawn map of Westfield from the 1700s that depicts the homes of several ancestors. 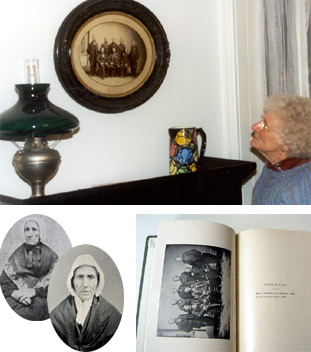 Clockwise from top: The photograph of the DeCamp brothers from the family home; the same picture as is appears in the family history found in Cincinnati; Phoebe Hedges Baker marsh, the researcher's great-great-great-grandmother, and her sister Mary Baker Decamp—theDeCamp family connection discovered in WorldCat.