Editor's note: JD Shipengrover is a UI Designer for OCLC Research, and she's done a guest post for us today. A team from OCLC Research including Lorcan Dempsey, Thom Hickey, Diane Vizine-Goetz and Jeremy Browning created this nifty app that shows the connections between WorldCat Identities. Read on. 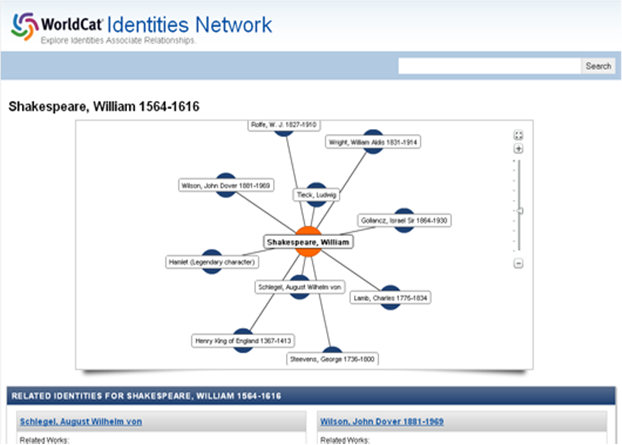 The app uses the WorldCat Identities Web service, which provides each Identity with up to 10 related identities. So each Identity becomes a Network of sorts, with relationships visualized. With this in place, you can then easily jump from Identity network to Identity network by selecting the name in the visualization. And remember--a WorldCat Identity can be a person, a thing (the Titanic), a fictitious character (Harry Potter), or a corporation (IBM). In addition, the app also links to WorldCat.org and WorldCat Identities to give you in-depth information for any given Identity.

Try it out and let us know what you think.

And here's a challenge for you: Find the Six Degrees of Separation between Jane Austen and Aldous Huxley.

(Hint: if you get stuck, we gave you the answers in the app gallery.)