Over the course of the last 6 months, autosuggesters have been making an appearance many places in library user interfaces. OCLC Research has piloted auto suggest functionality in a development version of Identities and in VIAF. The Identities autosuggest functionality is outlined in issue 9 of code4lib journal article. Currently, the Identities autosuggest is experimental. VIAF also includes an autosuggest feature which can be seen on viaf.org . This autosuggester is currently also available as a web service which can be queried from an external application. For more information on this take a look at the VIAF documentation on the Developer Network website. Elsewhere autosuggest has also been of interest at Washington State University library and Norwich University. At Washington State University, Jon Scott has create auto suggest code that uses data from Freebase. The autosuggest as been prototyped as part of the Orbis Cascade Summit consortia search. One interesting aspect of this autosuggester is that it shows details for suggestions without leaving the auto-complete interface. So for example if you mouse over an author suggestion then you'll see summary information from Wikipedia. 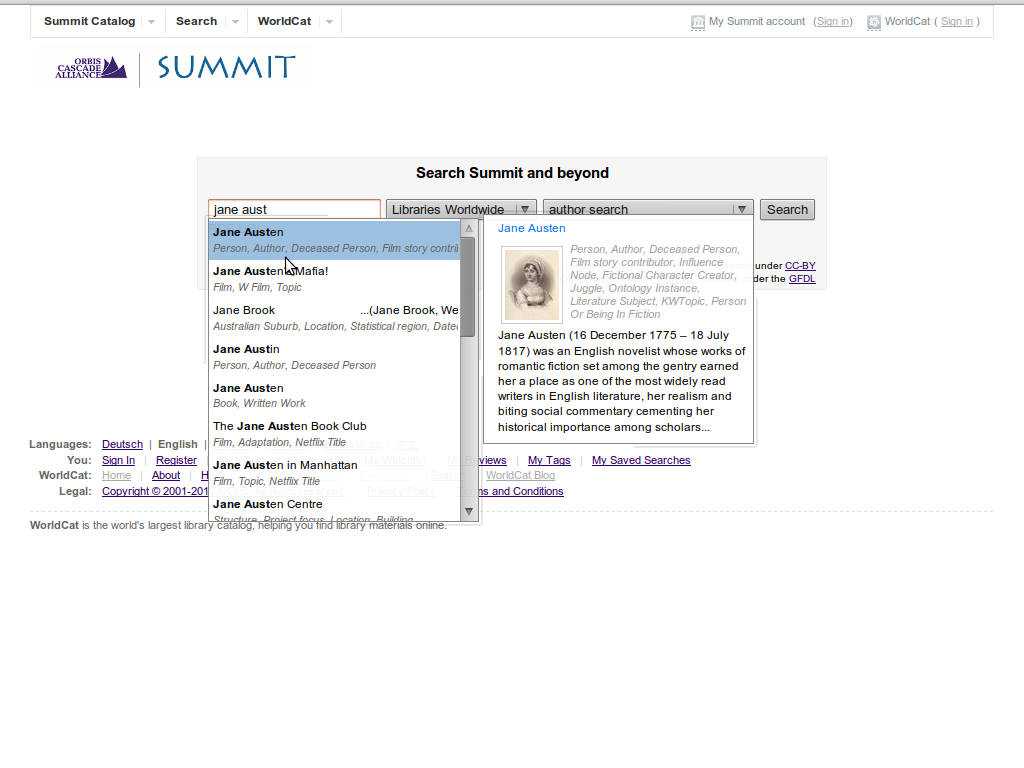 At Norwich University Elliot Polak has developed an autosuggester which can be implemented with any search box. The autosuggester is powered by a MySQL database which contains all the library's titles, authors and subject headings. A PHP script queries the database for matches and a Javascript displays the results below the search box. You can see Norwich's implementation on library homepage. I talked to Jon Scott yesterday about autosuggesters and I suggested using Identities autosuggester for authors. Because the Identities metadata is so rich it would also be possible to create a mouse over with information about the author such most popular books. I'm hoping Jon and I might get to collaborate and try something like this out in the not too distant future. In general, providing suggestions and anticipating user needs seems to be on the rise in libraries. As a result, I would be surprised if we see additional autosuggest and auto-completion features and services in the not too distant future.